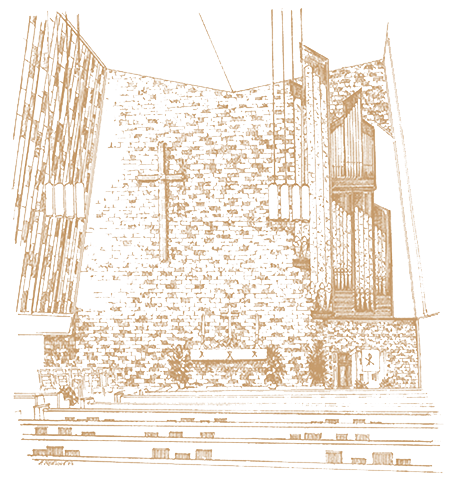 We are one of the founding participant churches in the Interfaith Hospitality Network (renamed Family Promise) sponsored by the Plattsburgh Interfaith Council. For a week, a few times a year, we provide a place for homeless residents with children to have a safe and comfortable place to stay.

Music has always been an important part of this church. Mrs. Kate Thompson Merrihew had been a leader in the church’s music program for approximately fifty years. She retired after conducting the music at the dedication service for this building in September 1958.

In 1982 a grand piano was purchased for use in the Sanctuary. An Allen electrical organ served the church well in its early years, but required ever more frequent repairs by the 1990s. It was replaced with a beautiful new organ made by the Russell Organ Company of Cambridgeport, Vermont in 1995.

The story of our church building on Beekman Street begins with the determination of the faithful members of the congregation to rebuild a new and modern building. Almost immediately committees were formed to determine the best course of action in building a new church. They were coordinated by a Building Committee chaired first by Everett Case and later by Herbert Newlove. Plans were made to raise the necessary money and discussion of various possible sites took place. By the summer of 1956, the Beekman Street site was selected and an architect was busy preparing specific building plans.

The ground was broken for the new church building with appropriate ceremonies on June 23, 1957. In August, 1957 a memorial cornerstone, made of stone quarried on the Day farm, was laid. The contractor was a Plattsburgh firm, Martin Fitzpatrick and Sons. Because the church could not afford a steeple, Mr. Martin Fitzpatrick, the contractor, donated the spire that rises from the church today. The church building was ready for use by September, 1958. On Sunday, September 7, 1958, Bishop Frederick Buckley Newell conducted an opening service dedicating the new building for service to God and to the Plattsburgh community.

The people of our church have certainly used the building in service to our community. Boy Scout Troop 39, established in 1933, has served boys contin-uously in our former and new church. Both the women’s and men’s groups have continued in service to God and to the community.

Since 1970 the Head Start program has rented a portion of the building, providing pre-school educational activities.

Our congregation worked to welcome and assist the Native Americans of the Ganienkeh Territory when New York State relocated them to nearby Altona.

In 1973, in answer to community needs, a program of providing emergency food assistance to needy members of the community was started. This has evolved into the Interfaith Food Shelf which today serves many people five days a week.

Methodists have held regular meetings in Plattsburgh since 1817, and Methodist preachers (as Circuit Riders) came to this area to teach and preach even before then. The church was organized and received its first stationed minister in 1826. The first church building was on Court Street and was dedicated in 1831.

Fires in 1846 and 1849 destroyed the buildings which were then rebuilt. By the 1880s the church had outgrown its quarters, and a new building was built on Oak Street and dedicated in 1885. On February 4, 1956 fire destroyed that building, and the present structure at 127 Beekman Street was designed and built by 1958.

On September 7, 2008, Plattsburgh United Methodist Church celebrated the anniversary of 50 years at its current location.

A Brief History of Our Last 50 Years

When the Rev. Lawrence Larrowe came to the First Methodist Church in 1955, the church was outgrowing its 75-year-old building. The church badly needed more classrooms and parking space. Larrowe immediately began working on the project of modernizing the building. Committees were formed and were considering the idea of a new building site.

However, on the night of February 4, 1956, a fire originating in the furnace room roared through the building and in a short time destroyed everything but two burned out towers and four sturdy walls. Saddened, but undaunted by their loss, the congregation attended services the next day in the auditorium of Plattsburgh High School. Miss Edith Sierk inspired all when she sang “We Would Be Building.”

Within two days more committees were formed and plans were made to provide meeting places for worship, Sunday School, and various other organizations. The other churches in Plattsburgh generously offered their facilities. For the next two and a half years, services were held in the Presbyterian Church on Sunday morning at 9:15. The Salvation Army Citadel was used for Sunday School and other activities.

1955 – Rev. Lawrence Larrow assigned and guides church community through fire and construction of a new building

2015 - Church celebrates 20 years of being a Reconciling Ministry